A board game for teaching sustainable development 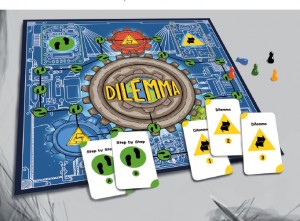 Dilemma is a quiz-like board game for 3-5 players, and a fun way to learn about sustainable development. The game also encourages participants to reflect, to debate and to think critically about sustainability dilemmas, which often have both moral and ethical dimensions.

The game is ideal for use in degree-level Engineering studies or in natural science oriented classes in high school. The box includes several sets of cards, aimed at different levels of knowledge and based on different topics, which could be covered in related lectures, briefings, or assignments.

Dilemma was developed to be used in classroom exercises or seminars, as a fun and interactive learning method for students. It is also a great tool for teachers, who can use the ‘dilemmas’ found in the box as a starting point for discussions, assignments or case studies.

A classroom package of Dilemma games consists of 8 boxes. With this package you will be able to run a workshop for up to 40 students/participants. Additional game boxes can be ordered at a discounted rate.

Get a FREE copy of the DILEMMA Teacher’s Manual – the invaluable instruction on how to get the most out of the DILEMMA board game in your classroom. Please provide an email address where we should send the download link:

How to use Dilemma in the classroom

Are you a teacher looking for good teaching tools that can contribute to your students’ understanding of sustainability issues? Are you keen to involve them in discussion and debate, and to foster critical thinking? Then Dilemma could definitely be of great value to you!

Dilemma was developed for exactly those reasons and works as a great and truly interactive teaching tool. It is a board game, which gives the exercise a playful touch. Students quickly learn how to play and progress through the game. The game may also be used in alignment with other teaching activities. The combination of activities has shown to be extremely powerful.

The structure around which the classroom utilisation of the game is integrated can have the following form. As a teacher you may use all of these activities or a subset at your own choice.

Learning tools such as the Dilemma board game may be extremely powerful, and even more so if used in a structured way. Playing the game repetitively and with associated debriefings and assignments has been proved to increase student learning and critical thinking extensively. 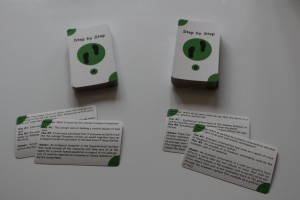 Progression in the game is power by the ‘step-by-step’ cards. On each card a knowledge question relating to a sustainability matter is stated. Each player begins their turn by answering a step-by-step question and if successful they may move their game piece along the board. If not successful, a series of clues are stated and the player may try to answer the question again after hearing each clue. The sooner a correct answer is claimed the faster the player will progress along the board.

Questions and clues are formulated in such a way that to give players the chance to reasoning to find a correct answer. In this way, they learn about the subject as the play.

There are two decks of step-by-step cards included, indicated ‘deck A’ and ‘deck B’. The former is intended for audiences with less prerequisite knowledge on the subject whereas the second is suitable for an audience that is given text book or other readings as part of the course where the Dilemma board game is used. Deck A is therefore very suitable for high school level or at first year university level. Deck B is suitable for university level.

As the game is played repetitively during the course, at each session players may by chance encounter knowledge questions that they recognize from previous game sessions. This gives them the opportunity to learn by repetition. 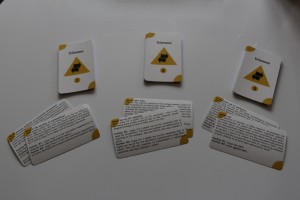 There are three decks with ‘dilemma’ cards included in the game box. Each deck corresponds to a specific theme: (i) sustainability concepts and paradigms, (ii) sustainability challenges, and (iii) relationship between sustainability and technology. For each game session, a new theme is chosen by the instructor. In this way, game sessions can by associated with different phases in a course and may be connected to different readings.

Dilemmas are intentionally polarised in the game. The player that in their turn flips a dilemma card will act moderator between two other players. They must then argue for the prewritten positions #1 and #2 respectively. This means that players will often have to formulate arguments for a position that they may in reality not agree on – which is a very valuable, though potentially tricky, task!

Sometimes it happens that students get locked up in discussions where the same arguments are bouncing over the table with not much progression. This is very natural and it is good for the student’s understanding to experience this. This is one of the experiences that are good to take up in the debriefing.

During debriefing, some of the dilemmas encountered during the game session should also be brought up and the discussion level can thus be raised with moderation by the teacher.

Players that are not directly involved in the particular debate are however not inactive in the exercise. After the debate they have to vote on who they thought won the debate. But they should not vote for which arguments they did agree on most. Rather, they should take under consideration some specified criteria:

The debate form in the Dilemma board game has been inspired by the structure of debate competitions. With this format, it is intended that the board game may encourage students to think critically and to inspire an open discussion atmosphere where different opinions and values are welcome.

In a constructive debate, the discussion reaches beyond simple polarisation. In the media, politicians are often locked into non-constructive debate and this often happens the first time students play Dilemma as well. However, after debriefing on their experiences and discussing why they might have felt uncomfortable in those debate situations, students tend to relax more the second time they play and even more so on the third time. This is one of the main reasons for scheduling a series of Dilemma board game sessions.

As they progress through the board game sessions, teacher debriefings and homework assignments, students usually get more and more relaxed in the discussions, which more on more evolves into a constructive form. At this point it is also valuable to discuss whether consensus is a favourable goal or not in those discussions. There are situations where it might, but in general it is not. At this point in their development, students may realise (with a little help from their teacher) that a diversity of views and values is actually good for the discussion.

Respecting other people’s views and positions – even when those differ from our own – and embracing differences is the ultimate learning objective with using the board game Dilemma. And this has a lot to do with achieving a sustainable development.

For inquiries on how to order the Dilemma board game, please make contact here.

It's nice to meet you! Would you like to know more about some practical tools and techniques that can help your students grow? I'd love to send you exclusive content about teaching sustainability.

I'll also send you a free copy of my book: A PRACTICAL GUIDE TO TEACHING SUSTAINABLE DEVELOPMENT [working title] The book will be released in a couple of months and as a valuable member of my email list I will also invite you to influence the content of the manuscript!

Enter your name and email in this form, and I'll see you on the inside!