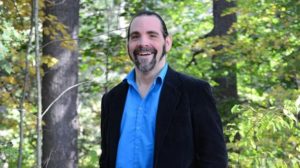 In this blog post I am delighted to present an interview with Jeremy Faludi, who is an Assistant Professor of Engineering at Thayer School of Engineering at Dartmouth College. Jeremy is a sustainable design strategist. He has contributed to six books on sustainable design, including Worldchanging: A User’s Guide for the 21st Century. He created the Whole System Mapping sustainable design method, designed the prototype of AskNature.org for the Biomimicry Institute, and a bicycle he helped design appeared in the Smithsonian Cooper-Hewitt Design Museum’s 2007 exhibit “Design for the Other 90%.”

Jeremy, could you tell us a little about your background?

Sure.  I grew up between the farmer’s fields and woods of rural Wisconsin, which I think is how I became an environmentalist.   Then I went off to the west coast and got a physics degree, then a design degree, and finally a mechanical engineering degree, with 15 years of industry consulting and jobs in between them, trying to make the world a better place though green design.  I just started teaching at Dartmouth a year ago, but before that taught at Stanford, Minneapolis College of Art and Design, and other places.

I had a hard time deciding between creative pursuits and the analytical rigor of solving hard problems.  Design is one of the few places that requires both in great measure, and sustainable design especially.  The problems we’re solving are extremely complex and difficult, and they require a ton of creativity.  But it’s immensely satisfying.

What is the Whole System Mapping method, and who is it for?

It’s a sustainable design method aimed at product designers, engineers, and managers.  It makes systems thinking simple, concrete, and actionable, and attempts to turn sustainability from a burden into a source of innovation.  The method combines big-picture creative thinking with quantitative sustainability metrics.  It broadens the design team’s scope by the creation of a visual whole-system map; a later step using this map also encourages more thorough and radical brainstorming. The method also helps target efforts to get the biggest improvements for the least work by setting ideation priorities and choosing final designs through quantitative measurements, such as life-cycle assessment or point-based certification systems.

In a study I performed with over 500 participants in industry and academia, practitioners valued Whole System Mapping not only for its sustainability benefits, but also as an innovation tool and a communication tool to get disparate team members of different specialties all aligned on the problem definition and goals.  It can also be easily combined with other green design practices like biomimicry, The Natural Step, 12 Leverage Points, and others. 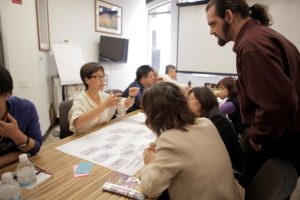 Where can people learn more about the Whole System Mapping, if they want to perform the method themselves?

You can find out more about Whole System Mapping and try it yourself in the VentureWell Tools for Design and Sustainability site.  There are three pages on Whole System Mapping: the first contains a six-minute video summary and downloadable PDF, the second contains a step-by-step exercise, and the third contains an example PDF.  There’s also an academic article analyzing it here.  Actually, the VentureWell site is most of a masters-level capstone class I taught on green product design, covering everything from energy to material choice to persuasive design, with recommendations for how instructors can integrate the content into ordinary engineering, design, or business classes. 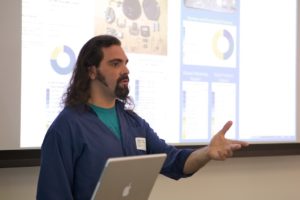 Which role do you envision that technology and design may play in the future to help us obtain a sustainable development?

Which of the grand challenges do you believe will be the most difficult one for us as a society to address?

What’s most difficult is not necessarily what’s most impactful.  I’m interested in what’s most impactful; if it’s easy, all the better.  I have a whole hour-long lecture on priorities for sustainability (in a nutshell, empirical research from many organizations around the world suggest dense livable equitable cities, better buildings, better transportation of people, better food systems, and cleaner energy generation). I also recommend Project Drawdown’s analysis.  But really, so many of these challenges are intertwined: for example, pollution mostly affects those in poverty, who are most often racial or ethnic minorities, etc.  So if you reduce pollution you help minorities, and if you empower minorities, they will force pollution reduction, etc.

What would be your number one advice that you would give to a young person who is concerned about the future, and who is thinking about which education route to take to play a role in making the future as bright as possible?

Any job in every industry can drive sustainability.  But some places have more leverage than others—business has the most leverage.  So even if you’re like me and prefer design, get some competence in business and work to redesign company strategies, or start your own company.  I recommend aiming for high priorities (as mentioned a minute ago), and looking for places where small interventions can have big effects.  For example, back in 2005 I was writing for Worldchanging, and wrote an article about how Google Maps (which only did driving directions then) should make an open API for cities to provide public transit trip planning, because Google had the best map interface and was providing it for free, while lots of cities were spending tons of money on custom transit mapping software with terrible interfaces.  One of the comments on the article was from the head of IT for Portland, Oregon’s transit agency, saying that they wanted the same thing but couldn’t get anyone at Google to talk to them.  I had friends at Google, and asked them to find the Maps people.  Six months later, Google Maps did transit, and now it does it on your phone in hundreds of cities around the world.  That software design has caused more people to switch to public transit than any innovations in train or bus design, station signage, route layout, or urban planning.  And it was cheaper and easier, too.

So look for places where small design interventions can have big effects, and aim to redesign business models as well as products.

It's nice to meet you! Would you like to know more about some practical tools and techniques that can help your students grow? I'd love to send you exclusive content about teaching sustainability.

I'll also send you a free copy of my book: A PRACTICAL GUIDE TO TEACHING SUSTAINABLE DEVELOPMENT [working title] The book will be released in a couple of months and as a valuable member of my email list I will also invite you to influence the content of the manuscript!

Enter your name and email in this form, and I'll see you on the inside!